World Rugby has confirmed that due to COVID, the Women’s RWC 2021 will now run from 8th October to the 12th of November 2022, in Auckland and Northland, New Zealand. As such, the women’s Rugby World Cup will run for 43 days, not 35, which gives the teams at least five rest days between matches.

Here is some key information on the 2021 women’s Rugby World Cup: 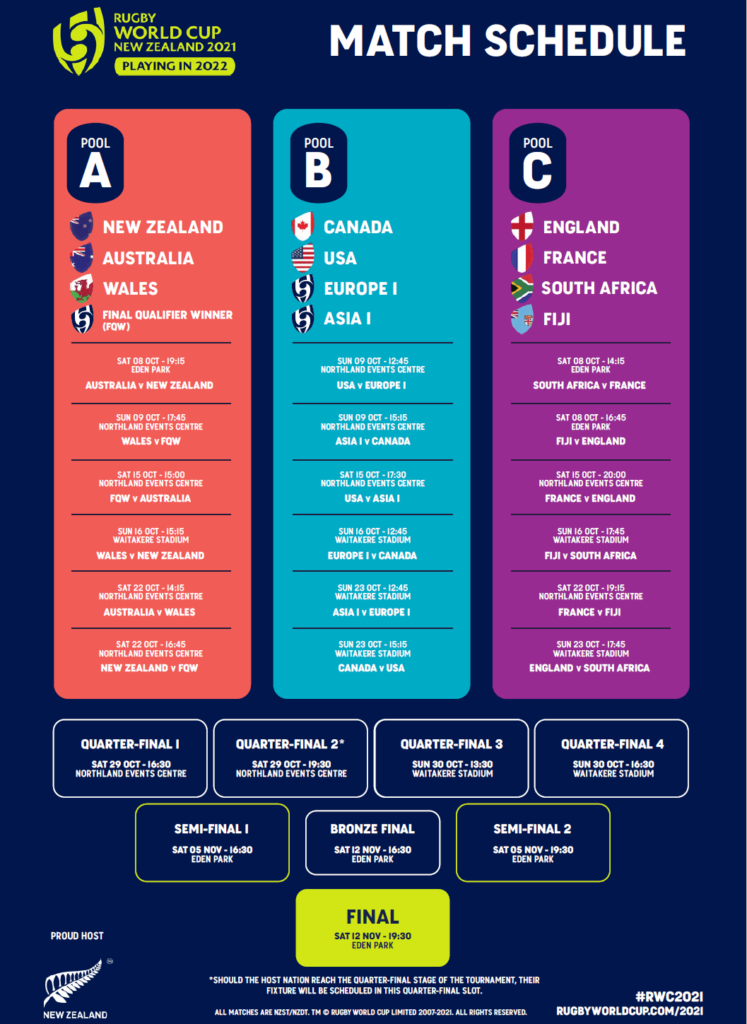 If you are interested in hosting a tour group to support your favourite RWC team or want to come to New Zealand as a rugby touring party to play local teams, watch the world cup and experience New Zealand, then we recommend contacting Rugby Tours International (RTI).

With less than a year to go, nine teams have already qualified.

Follow this link to read more about the RWC 2021 qualification process.

Which team is the favourite to win RWC 2021?

The women’s RWC in 2022 will be a tightly contested tournament! New Zealand’s Black Ferns were the favorites to win RWC 2021 for the following key reasons:

However, since their European tour in November 2021, where they were heavily defeated 4-0 by the power and flair of the England Roses and French teams.

As such, both England and France, with their powerful runners, kicking game and strong set piece plays, will also be strong contenders.

Then the Welsh, Irish, Canadian and USA women’s teams are also building strongly and should be considered as outsiders to at least cause a few upsets, though probably won’t have enough depth and consistent to take the title.

The women’s six nations from Sat, 26 Mar 2022 – Sat, 30 Apr 2022 will provide more insight on which European teams will be strongest come kick off time on the 18th of September!

The women’s world rugby union rankings, as at September 2020, are: Where can you buy tickets? We suggest following this link to find out how to buy tickets to the 9th women’s rugby world cup.